What are graphs used for?
A graph or chart is used to present facts in visual form. They are a drawing that displays the relative sizes of numerical quantities. A graph is one of the easiest ways to compare numbers. There are many different types of graphs and they can all be used different ways.


The following are three different examples of types of graphs: 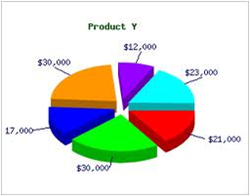 This is a pie chart it is used to show how a part relates to a whole. Pie charts display categories that are seen as the colored wedges that make up the circular shape. 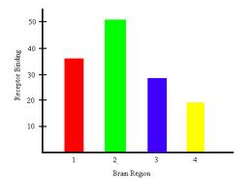 This is a bar graph they are used to compare the relationship between two variables, the independent and dependent variable. They are good for showing changes in the variables over a period of time. Types of bar graphs are simple, horizontal, and histograms. 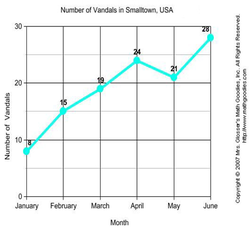 Line plots make it easier to make conclusions and see trends in the data. The line that is created from the graph does make it easier to see data similarities and and differences, it also displays the frequency a number occurs in the set.

How to Construct a Graph

There are three skills that involve constructing a graph.
1. Find the range of the data by subtracting the highest number in the data from the lowest number.
2. Determine how many intervals you want to have on the axis. Divide the range by the number of intervals you want.
3. Begin labeling the scale by using multiples of the rounded number.